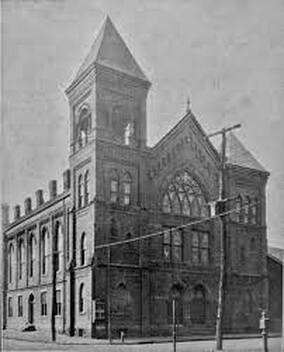 A large plot of land on Sarah Street was bought. The Church's construction cost was around $36,000 (a lot back then!). Some people say that the catacombs were dug and the foundation begun in 1860, but that progress was stopped due to the Civil War. After the outbreak of the Civil War in 1861, the pastor, Rev. James F. Read, D.D., took a temporary leave of absence, and entered the army as a chaplain to the troops.The Church building was completed in 1869, consisting of the large sanctuary on the second floor, and the meeting hall on the ground floor. It had large and beautiful stained glass windows as well. An enlargement of the Church building was completed in 1893, with the addition of rooms, towers, a front entrance on Sarah Street, stairways, a pipe organ, and a balcony in the sanctuary. In 1896, the South Side Presbyterian Church established the Arlington Heights Mission Church, and some members moved their involvement to that work.

In 1913, the South Side Presbyterian Church enlarged its property and building by constructing the Community Center wing which included a gymnasium, showers, classrooms, and offices. This was the first gymnasium in the South Side. The Church had (and still has) a holistic view of people's needs, and opened the Community Center up to the public with daily programs and activities for all ages. At that time, the population of the South Side had increased to a congested 40,000, so the Community Center was much needed and used as well. In April 1919, the Public Health Nursing Association established one of its first Allegheny County stations in the South Side Church. Public prenatal and baby conferences were held in the Church, and a staff of 28 nurses served the South Side area with the ministry of healing. Later this became known as the Visiting Nurse Association, and was active into at least the 1950s. Another aspect of the Church was its choir. At times, it was so appreciated that it performed on Pittsburgh public radio. Professor J. M. Hammond organized and directed the large choir in the early 20th century, one of the earliest volunteer choirs in the city. His son, Clyde E. Hammond, also directed the choir fruitfully for many years after his father's death. In 1949, the Ukrainian Presbyterian Church of South Side left its separate facility, and its members united with the South Side Presbyterian Church. Their pastor, the Rev. Dimitri Halenda, became the assistant pastor of this Church and led a worship service in the Ukrainian language during this Church's Sunday School hour until his death in 1967.

The peak of the Church's membership was in 1912 with 895 members. It then fluctuated between 600 and 800 members until 1944 when it dropped to 444 members. In the 1940s and 50s, many members moved out to less urban neighborhoods. The population of South Side itself decreased dramatically as well. Since the 1980s, the Church has endeavored and accomplished many faith-filled actions; it has reconnected with its surrounding neighborhood, and the majority of its new members again come from the South Side itself. The Church is small, but has grown in attendance and in mission involvement in the area. It has reactivated important Community Center ministries, including many for community youth, and added some new, needed programs like its Food Pantry, Clothing Pantry, family counseling, and more. The Church also houses an independent Afterschool, Dance classes, and numerous 12-Step groups throughout the week.

Starting in 1984, the Church began repairing and renovating its then rather dilapidated building. By 1996, the renovations and restorations had made the building again a beautiful space inside and out for the worship of God and for community activities, including updates to be fully handicap accessible. Of course, repairs and renovations continue! We were blessed to put on a new main roof in 2011! Numerous independent groups utilize space in the building as well. These are some of the ways the South Side Presbyterian Church today benefits the community. Our Church has also been very active in promoting social justice, holistic health, redevelopment, personal faith, and spiritual development. The lives of many people have been touched annually with the help and hope of Christ through our varied ministries and mission. We want to express our gratitude to all who over the years have contributed to the ministry and mission of the South Side Presbyterian Church — faithful members, ministers, friends, and other churches and organizations. This year (2014), we are celebrating the Church's 163rd Anniversary! So thanks be to God for the privilege of keeping this historic Church going with relevance and transforming power now and into the future! We also praise God for being alive in the Spirit and Jesus the Risen Christ, the Beginning and the End, Who leads us in serving and loving one another! We hope to continue living out our Church's motto, to be "Transforming, Not Conforming!"